al-Ghazali on reading the Quran 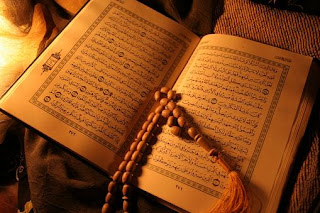 The respected Persian Islamic scholar, al-Ghazali (1058-1111, born and died in Iran), wrote a prominent book series called the Revival of Religious Sciences (Ihya'a 'ulum al-din). In the book, al-Ghazali integrates the principles of Sufi into the Islamic teachings and Shari'a. In one of this series' books, he talks about the etiquette for reading the Quran. Here's an extra brief point summary based on the book(provided by Sunni Path) :

And those who strive in Our (cause),- We will certainly guide them to our Paths(29:69)
written by Nur Sakinah Thomas @ nur sakeenah at 9:01 AM No comments: Links to this post

Nur Sakinah Thomas @ nur sakeenah
Life is filled with beautiful moments. Syrian Christian family ancestry from Antioch, Syria now known as Hatay, Antakya, Turkey.There are no words to heave the rhythms of my heart, the melodies of my soul and the serenity of my life."Truly my Lord is with me, He will Guide me through." (Q26:62). Thank you Allah for Your Endless Blessings.